Should you sign a prospective client’s pre-sales NDA and non-compete? 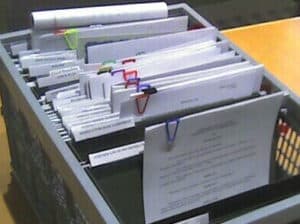 A client asked, “I have a potential agency client asking me about NDA and non-compete. How can I combat requests like this to not box us out? Are there certain parameters you put in place?”

When your prospect wants an NDA in the sales process, it is often a red flag.

For example, venture capitalists refuse to sign NDAs from startups—the VCs don’t want to get in a situation where they might get sued if another of their startups coincidentally pursues a similar idea, and the VCs also know it’s less about the idea and more about execution.

As a business consultant, I offer to sign NDAs—but I also make a point about confidentiality. In fact, it’s the first of my company Values.

That positioning seems to work. Out of all my potential clients, I’ve had only two prospects who demanded an NDA during the sales process. (Perhaps not surprisingly, they also turned out to be difficult to work with in general.)

Say “No” to Prospect Non-Competes

While I’d sign an NDA (mine or theirs), I’d never sign a non-compete, since that would limit my business—100% of my clients are agencies. I do say “no” to agencies where there’s a conflict, but because my clients are worldwide, I’ve run into only one direct conflict.

The same factor is at play when agencies specialize—specialist agencies tend to do better, but overly broad non-competes keep you from specializing (e.g., “you can’t work with any other retail stores regardless of their geographic location”).

This is especially the case during the pre-sales process—you’re signing something that limits your business, without getting a commitment back from them.

When agencies do online marketing, it’s appropriate to refer-away business that would create a conflict of interest (for instance, you can’t ethically help two clients that are both targeting “cosmetic dentist Dallas”). But I wouldn’t sign an explicit non-compete—that’s too restrictive.

How to Navigate the Sales Conversation

For agencies, I’d say a pre-sales NDA is appropriate—that you won’t share what you tell them. Be sure you have a process to maintain the confidentiality you’ve promised. In contrast, a non-compete says “we don’t trust your agency to do the right thing,” which to me is more of a problem.

I suggest saying, “Most of my clients don’t request an NDA before we commit to work together, but I’m open to it. Could you share more about what’s behind the request?”

Regarding the non-compete, you can ask about what’s behind that, too—but I recommend declining them as a client if they insist on a non-compete. Unless, perhaps, they sign a BIG contract AND also pre-pay you a ton of money. But the relationship would be starting on unequal footing, with them getting a big concession from you.

Where to Get Agency-Specific Legal Advice

If you do move forward with a non-compete, I recommend getting feedback from a lawyer specializing in agencies. I’m not a lawyer, so here are two to consider—both work with agencies nationwide:

(As I note in my company Values, I don’t receive any referral fees for recommending Gabe or Sharon.)

Question: How do you handle when prospective clients ask you to sign a non-compete?