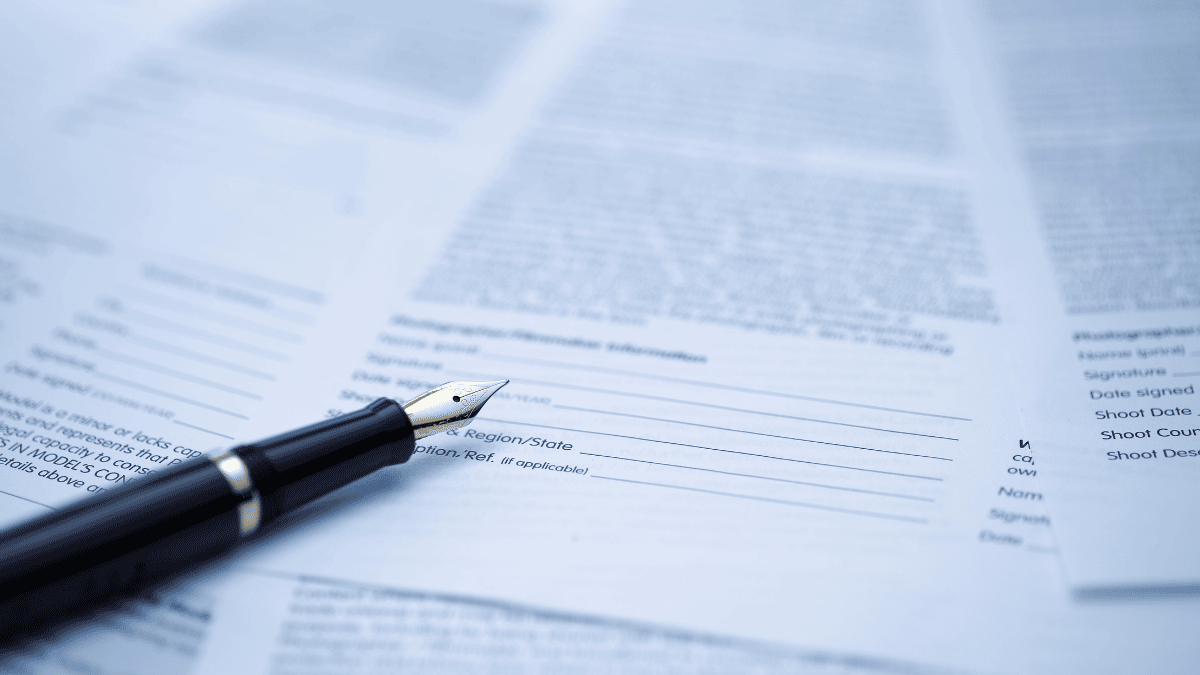 Remember the UC Davis pepper-spray incident? It’s back in the news—turns out the university paid two agencies at least $175,000 to bury the news online. The client’s CEO was removed from her position.

During the news investigations, UC Davis was forced to publicly release the agency sales proposals, contracts, and SOWs. At this point, I bet both agencies regret taking the contracts—but let’s take a look at what you and your agency can learn from the proposals. 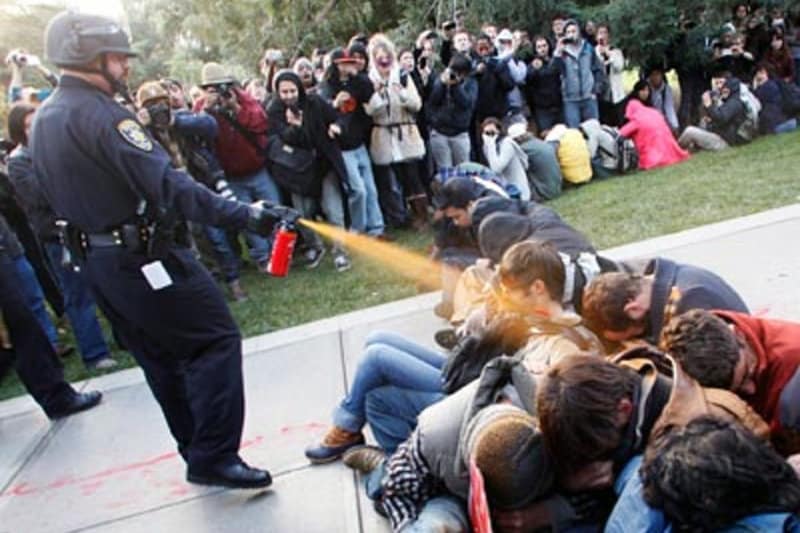 In November 2011, campus police in riot gear pepper-sprayed students during a campus protest. The photo of police lieutenant John Pike (see right) went viral, as a symbol of police brutality. What started as a peaceful protest turned into a PR crisis for the university.

An investigative task force concluded in 2012 that there was no justification for the police action. All along the way, UC Davis Chancellor Linda Katehi was criticized for how she handled the situation and its aftermath. She resisted calls for her to resign, and the school declined to fire her. The news eventually fell off the front page… temporarily.

In April 2016—more than 4 years after the original incident—it emerged that Chancellor Katehi had hired agencies Nevins & Associates and ID Media Partners (“IDMLOCO”) in 2013-2016 to use SEO and other tactics to “hide” news about the pepper-spray incident, including improving her personal online reputation.

Although it’s normal for a client to hire PR professionals and SEO experts, three things got negative attention—the fact that the university spent $175,000 on these services, and the fact the contracts’ scope included cleaning Katehi’s personal reputation, and that she apparently lied about the scope.

Ultimately, the situation went from ‘hire an agency’ to ‘paid coverup.’ Chancellor Katehi was removed from her position a couple weeks after the coverup went public, pending a new investigation into hiring the agencies and potentially lying about the specifics—plus charges of nepotism that appear to be unrelated to marketing.

Certainly not what the agencies or the client expected—but you can learn from the proposals, which included $15,000/month and $22,500/month retainers and an $82,500 fixed-scope project. Let’s take a closer look.

Observations from the Proposals & SOWs

Personally, I don’t think I’d have been comfortable doing SEO related to the pepper-spray incident—my impression is that UC Davis was ‘sorry it got caught’ instead of truly sorry.

However—even if you wouldn’t have taken this specific job—your agency can learn from the proposals and contracts. From my review of the Nevins contract and IDMLOCO contract, several things stand out.

I see some agencies invest tons of time in nice-looking proposals. Yet neither of the winning proposals have high production values—which suggests they won based on the expected results, not proposal design.

The IDMLOCO proposal is attractively designed but it’s not fancy. The Nevins & Associates proposal looks like a Word document—yet landed nearly $100K in work.

2) Supporting your contact’s personal and professional goals can help build your relationship… usually.

As Chancellor, the school described Linda Katehi as UC Davis’ “chief executive officer.” In contract negotiations, I’m sure this implied to agencies that she was the final decision-maker on terms.

The scope of the Nevins contract included SEO to improve her personal online reputation—specifically to eliminate pepper-spray results when people searched for her name.

It appears IDMLOCO was focusing on Katehi’s reputation, too—and then she lied about it. According to The Atlantic:

“Documents released to The Sacramento Bee late Wednesday through California Public Records Act requests show how closely the university’s image consultants tracked coverage of Katehi’s latest controversies. One email from Sacramento-based IDMLOCO dated March 7 suggested a way of “inserting some positive Linda Katehi press into the conversation once the time is right.” Other documents showed campus officials received regular reports on how Katehi’s reputation was being affected by media reports.”

I’m a fan of finding ways to ensure your agency is helping your client contacts meet their goals—but spending a public university’s funds on personal reputation management seems to have taken that too far.

For most agencies, it’s a lot easier to upsell a client than close an entirely new sale.

A second contract was awarded to IDMLOCO in February 2015 for a fee of $8,000 a month – up to a limit of $96,000 – to develop an “integrated social media program for executive communications.”

IDMLOCO was awarded a third contract in September 2015 for $22,500 a month, or a maximum of $67,500, to “provide an assessment of the University’s Strategic Communications redesign.”

The second and third contracts don’t appear to be related to the pepper-spray PR crisis, but they suggest UC Davis was happy with IDMLOCO’s work and wanted them to do more.

Nevins & Associates is based in Maryland—nowhere near the client in Davis, CA—but the proposal highlighted unique experience, including David Nevins’ role as former chair of the University System of Maryland Board of Regents. The budget included $9,000 for travel and noted that work would be remote and in-person.

In contrast, IDMLOCO was local—next door to Davis in Sacramento. That isn’t a focus of their proposal, but it was likely a selling point.

“During Katehi’s tenure, the university increased its communications budget by $1.6 million, including $800,000 allocated for new and existing employees to work on social media, Web development, videography and news. The school also paid $1 million for a statewide advertising campaign highlighting its contributions to California agriculture, she said.”

More budget for marketing = more budget for agencies, even when there’s not an international PR crisis like the pepper-spray incident.

6) The proposals were probably too deliverable-focused.

Both proposals focused on listing deliverables, instead of focusing on likely outcomes. The Nevins proposal was better at describing potential outcomes, but it also provided some free insights into media outlets their campaign would target.

It’s better to focus on outcomes, but I suspect the Purchasing department created pressure to get info on deliverables—because it’s easier to do a deliverable checklist when it comes to confirming the agency did what it agreed to do.

7) Sales language can look like pandering in the cold light of day.

The proposal language didn’t look unusual compared to agency proposals I’ve seen before—but the PR crisis underlines that what looks normal in a sales proposal can look sleazy to outsiders.

For instance, Nevins highlighted his higher-ed experience—a legitimate selling point, yet amidst scandal, it looks like he was trying to monetize a government service role. Likewise, consider the language about SEO:

In short, they’re saying they’ll create a strategy for on-site and off-site SEO work. That’s a ‘normal’ description of SEO services, except that it sounds sinister in context—because it was designed to hide a reviled news event.

8) Clients may throw you under the bus.

“In hindsight, we should have been more careful in reviewing some of the more unrealistic and ridiculous scope-of-work claims in the written proposals of our outside vendors,” Katehi said. “What might be accepted industry hyperbole in the private public relations world falls far beneath the high standards of a public institution of higher learning.”

My translation? ‘We’re sorry we got caught. The agencies promised big results, which is why we agreed to pay them a lot.’ She got caught, so she threw the agencies under the bus.

Although the Nevins and IDMLOCO contracts were sizeable, the contracts show the agencies had to work with the school’s Purchasing department.

From my own experience, that’s never fun—Purchasing’s job is to spend as little as possible, which typically means treating any services as an undifferentiated commodity.

The contracts also required up to $2 million in various types of insurance coverage. Want a big contract? Be sure your insurance policy matches.

10) Adjust the scope to the client’s needs.

I noticed that the Nevins contract was just under $100,000—it was $99,000, to be exact. I’m curious whether the agency and client “structured” the contract to be just under $100K to avoid triggering a higher level of internal signoffs.

Both contracts are a fraction of the university’s overall budget, of $4 billion.

Learning from this at your agency

Should Linda Katehi have hired the two agencies in the first place? As Chancellor, she’s responsible for the school’s reputation—but using public funds to help her personal reputation seems to have taken it too far.

Before you submit your next proposal, think: What would it look like if this proposal went public? Most clients aren’t controversial but some are.

If you make it a practice to work with controversial clients, be sure you’ve updated your agency’s own crisis communications plan. The agencies’ apparent “no comment” stance doesn’t appear to be helping.

Question: What’s your reaction to the Nevins and IDMLOCO sales proposals?