How to get bigger clients: Learn from this six-figure client.

Most of my agency-owner clients want to know how to get bigger clients at their digital marketing agency. The particulars of my advice vary for each agency, but at a high level, it’s about a combination of upgrading your processes and succeeding in sales.

Your agency can learn a lot from the WRAL.com website redesign, as recently shared by John Conway and William Ammerman at the Triangle Chapter of the American Marketing Association (AMA). They compared the redesign to rebuilding a jet mid-flight.

The high-traffic WRAL.com news website gets over 100 million monthly page views from over 3 million monthly unique visitors. The site serves up to 7.5TB of data on a peak day and has over 300,000 story-level assets.

John and William declined to disclose the year-long project’s specific budget (just that it was “six figures”). I estimate their redesign budget was $250-400K.

They kept the existing custom content management system (CMS) from 2006, handled back-end development in-house, and outsourced user research, UX design, and front-end development to Viget Labs in Durham. If WRAL had also redone the CMS, I estimate the development would have made the project more like $500K+.

Neither figure counts the value of salaried staff members taken off other work, which surely would make the project a lot more expensive. But the investment makes sense—WRAL is the dominant news source in the market. With the TV channel, WRAL.com is Capitol Broadcasting’s primary news distribution method.

Haven’t worked on a web redesign project that big at your digital agency? Their takeaways will help you translate your own existing experience to bigger projects… and also decide how big you really want to go. 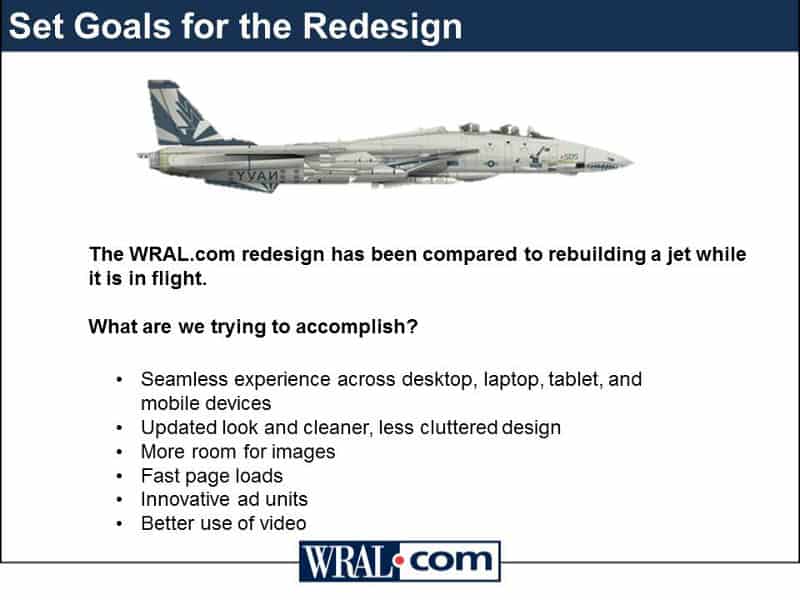 Hiring a digital agency helped the client get things done faster and better, since the project was like “rebuilding a jet while it is in flight.”

I asked during the Q&A how WRAL decided what to outsource to their digital agency, versus do in-house. John and William said it came down to timeline and expertise.

Their in-house team didn’t have the UX and user research experience. Although WRAL concluded they could have done the front-end development work in-house, it would ultimately be faster for Viget to implement the responsive design front-end, given their expertise in that area.

Remember that in your own sales efforts—the client benefit to hiring your agency isn’t just your expertise but also your ability to get things done faster than if they did it in-house. John and William noted that their in-house team still had to do their day-to-day jobs; the website redesign wasn’t the only thing on their plate.

The Triangle AMA event takeaways focused on advice for clients—but thinking about their mindset will help you do a better job as a digital marketing agency helping those clients. John and William shared 12 key points. 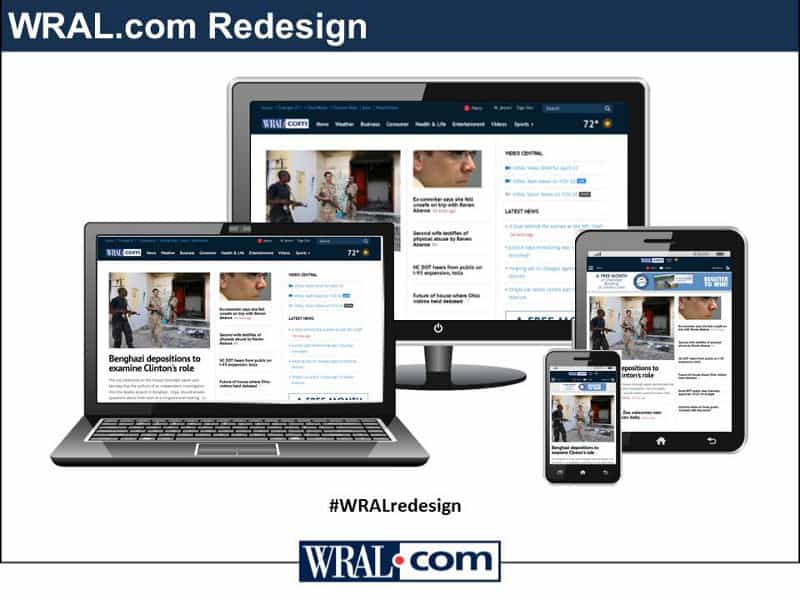 The client wanted to keep up with new technologies, like responsive design, which didn’t exist when they built the original site in 2006.

1) Your website needs to keep up with changes in technology. John and William noted how responsive design didn’t exist when WRAL built the original site in 2006. Making the new site responsive was an important to-do, along with adding social sharing features.

2) Analyze your end users and how they interact with your site. For instance, the heatmap from user testing showed that people were ignoring the video sections of the site. The redesign rearranged things to fix that.

3) Clearly define your goals and deliverables for your team, partners, and stakeholders. In WRAL’s case, this meant balancing the needs of the news team, the ad sales team, advertisers, and end users, among other stakeholders. This also meant clearly defining what they’d outsource (in this case, they outsourced UX design, user testing, and front-end development to Viget Labs).

4) Budget carefully. It isn’t cheap! John and William described the project costing “six figures,” but given the number of staff people involved, I bet the true economic cost was even higher than that—maybe even close to a million dollars if you include salaried staff members pulled away from their regular job.

5) Communicate changes to your internal and external audiences. In addition to doing internal meetings, WRAL’s sales team is meeting with advertisers and advertisers’ marketing agencies to explain the changes. In particular, they’re focusing on how the changes will affect each audience. Smart idea!

6) Involve key stakeholders early to achieve buy-in. They managed which people had signoff, but they got people involved early so they could manage expectations along the way. This helped them avoid surprises toward the end. 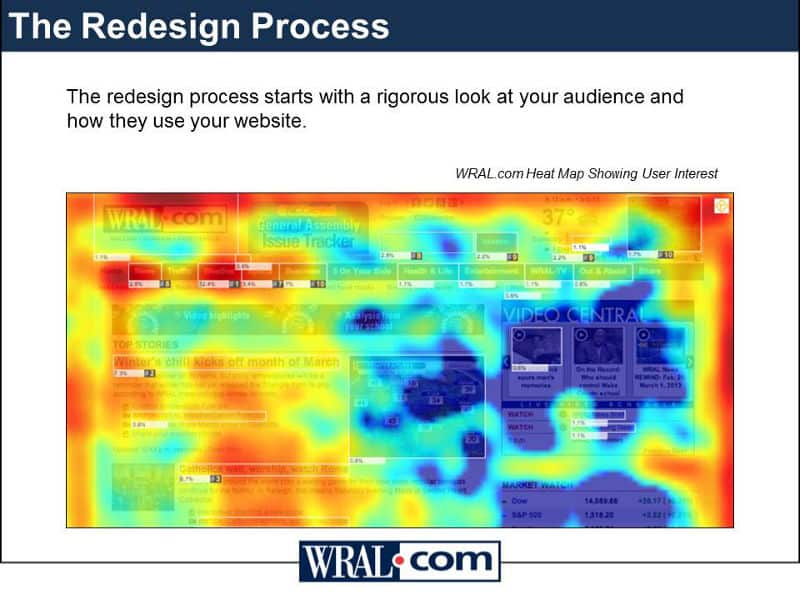 The client said that in retrospect, they’d have budgeted even more for user testing

7) Apply usability testing to achieve a world-class user experience. William said they probably should have budgeted even more for user testing.

8) Consider how your redesign impacts your web developers, content creators, ad operations, and partners. For instance, William noted that they realized the redesign’s new options for Ad Units means that their ad operations team would now be trafficking 3X as many types of ad units. They worked with them early on to figure how that would impact internal operations.

9) How will you measure success? WRAL defined success in several ways. John and William didn’t delve into this, but it’s clear agencies need to do this—it’s hard to show the client the project succeeded if you can’t compare it to metrics you and they chose at the beginning.

10) Give yourself time. Acknowledging it was a complicated project, they updated their expectations at the beginning to assume the project would take a year—and the project’s on track to finish on time! [Note: This matches my own experience, in that I’ve found website projects tend to cost twice as much and take twice as long as estimated, if you’re overly optimistic. –Karl]

11) Have a dedicated project manager. William said this was vital; they couldn’t have done it without a dedicated PM to keep everything moving. I asked afterwards whom they’d hired as a PM—John said they’d hired Melissa Kennedy of Esther Mae Marketing.

12) Plan. The project used a blend of Agile and waterfall. John noted they didn’t do 100% Agile based on the communications overhead involved. That is, their in-house team couldn’t be focused on supporting the website project with daily standups and other meetings. Using a mix of Agile and waterfall meant they could balance the demands on their time, while being able to adapt along the way. 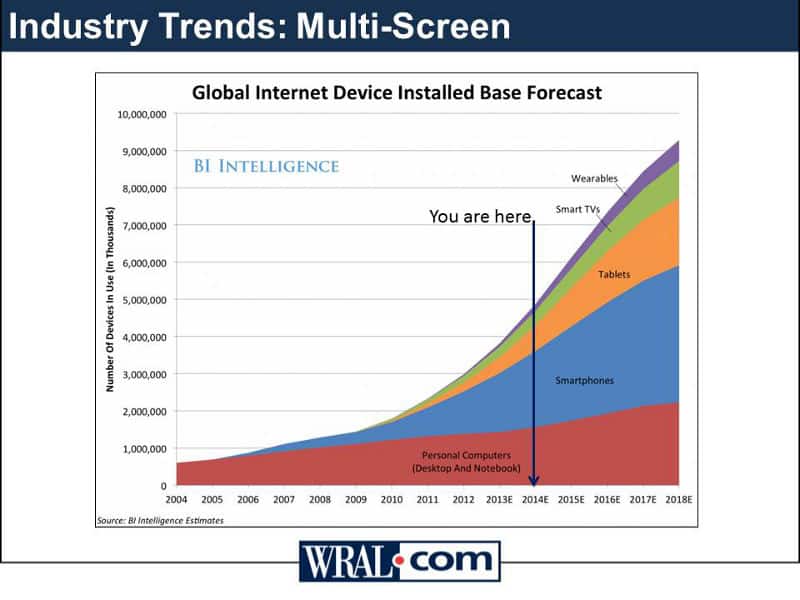 What happens if your agency doesn’t have the experience yet itself but you’re trying to land a big project with a new client? Review what happens in big projects others have done, and connect those lessons to your agency’s similar results on smaller projects. But be careful.

It’s a terrible feeling to sell a project and find yourself deep in over your head. If you don’t grow strategically, a big project can bankrupt your agency.

As an agency consultant, I help my clients get bigger clients themselves. From an operations perspective, you’ll need to overhaul your agency’s approach to sales, project management, client service, design, development, and QA. That’s how you successfully go from $5K to $10K, then from $25K to $50K, and then from $60K to $100K+.

What have you seen change when your marketing agency started doing bigger projects?

For more insights into what big-budget clients expect, see John and Bill’s WRAL presentation on Slideshare.

WRAL.com Redesign Presentation Made to Triangle AMA on November 21, 2013 from WRAL